“[The Proto-Indo-Europeans] occupied a part of the world — the steppes — where the sky is by far the most striking and magnificent part of the landscape, a fitting environment for people who believed that all their most important deities lived in the sky.” (Anthony 99) 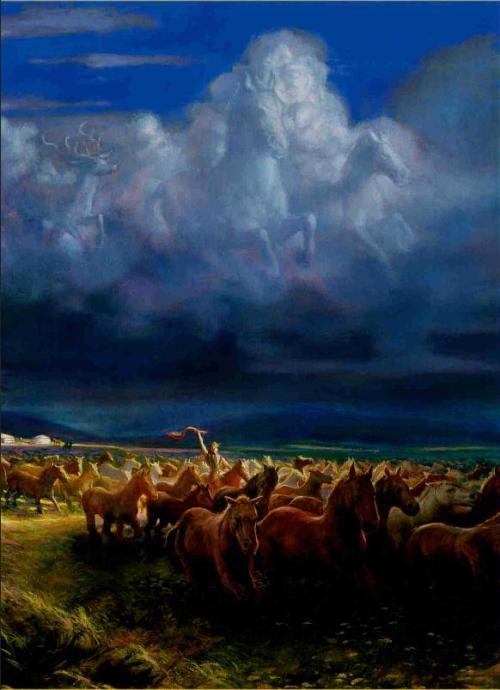 The Proto-Indo-Europeans were a prehistoric culture that inhabited uncertain steppe-land parts of Eurasia probably near the Ural and Caucasus mountains. As this culture branched out into the world through gradual change daughter-languages and cultures arose — Myceneans, Greeks, Romans, Hittites, Indo-Iranians. Each of these continued to branch out also as time wore on.

Although the image above depicts the Scythians, descendants of the PIE people who inhabited the Eurasian steppes around the Iron Age, it probably accurately reflects a portrait of what PIE life looked like also. The Proto-Indo-Europeans can be confidently placed as no earlier than 4,000 B.C.E. (because the language has words for wheel and wagon and archaeologists can identify when those items first definitely appeared). The latter era is less certain — somewhere around 2,500 B.C.E. The Hittites, one of the first daughter cultures begin to appear in modern Turkey around 1,500 B.C.E.

Using similarities found in ancient and modern Indo-European languages as well as rules of linguistic change over time, linguists are able to recreate (in part) the mother-language from which these others arose. Beyond that, virtually nothing is known about the Proto-Indo-European people. But a partially recreated dictionary of their language reveals much.

“The speakers of Proto-Indo-European were farmers and stockbreeders: we can reconstruct words for bull, cow, ox, ram, ewe, lamb, pig, and piglet. They had many terms for milk and dairy foods, including sour milk, whey, and curds. When they led their cattle and sheep out to the field they walked with a faithful dog. They knew how to shear wool, which they used to weave textiles. . . . They tilled the earth (or they knew people who did) with a scratch-plow, or ard, which was pulled by oxen wearing a yoke. There are terms for grain and chaff, and perhaps for furrow. They turned their grain into flour by grinding it with a hand pestle, and cooked their food in clay pots.” (Anthony 91)

But what struck me as most interesting is that “[t]hey divided their possessions into two categories: movables and immovables; and the root for movable wealth (*peku-, the ancestor of such English words as pecuniary) became the term for herds in general.” Id.

So the classification scheme we see in Louisiana property law (and other civilian jurisdictions) has its roots in a culture far older than Rome. This offers hints not only at the material culture of the Proto-Indo-Europeans but also to some extent their society and prehistoric law.

Whatever form of law the Proto-Indo-Europeans had it likely wasn’t developed as much as the Roman law. More so, it probably was rooted in religion and strong social mores. “The speakers of Proto-Indo-European lived in a world of tribal politics and social groups united through kinship and marriage. They lived in households, containing one or more families organized into clans, which were led by clan leaders, or chiefs. They had no word for city. Households appear to have been male-centered.” Id. (Reconstructed Proto-Indo-European words omitted).

One aspect of Proto-Indo-European law that seems well-grounded is a form of contract between the host and guest. The basis is found in the “similarity between English guest and host. They are cognates, derived from one Proto-Indo-European root (*ghos-ti-).” The same word was used to describe both host and guest meaning the word rather referred to the relationship between the parties and not the parties themselves. “The guest-host relationship was bound by oaths and sacrifices so serious that Homer’s warriors, Glaukos and Diomedes, stopped fighting and presented gifts to each other when they learned that their grandfathers had shared a guest-host relationship.” Id. at 301.